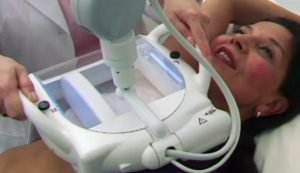 A U.S. Food and Drug Administration panel today approved the widespread use of an automated ultrasound machine that would give doctors a detailed image of dense breast tissue, helping them to spot cancerous tumors.

The FDA reviewed the safety and effectiveness of the Automated Breast Ultrasound, a device that uses an automated, Xerox-like system to get ultrasound images of breast tissue. ABUS is intended to screen women with dense breast tissue, for whom traditional mammograms may be inadequate.

“We know that mammography is limited by breast density,” said Robert Smith, senior director of cancer screening at the American Cancer Society. “Sometimes the glandular tissue is so dense that radiation doesn’t penetrate it. You can’t see anything.”

The dense tissue makes it easy for tumors to hide on traditional mammograms.

Some research estimates that about 40 percent of women have dense breast tissue.

According to ABUS’ manufacturer, U-Systems, the device provides 3-D images of breast tissue and is intended for use along with mammograms, not in place of them, and to “increase breast cancer detection” in women with dense breasts who have already received a benign mammogram.

“This panel review, part of the FDA process for assessing new technology, brings us one step closer to an approved adjunctive screening tool for women with dense breasts,” said Ron Ho, president and chief executive officer of U-Systems, in a statement.


Some say ultrasound is a valuable tool for finding breast tumors not easily spotted with other tests. Others say greater detection of abnormal spots on ultrasounds would lead to more biopsies but not necessarily better outcomes for women with breast cancer.

For women at an increased risk of breast cancer, such as those with dense breasts or those who have had breast cancer before, doctors may use additional screening tools, such as MRIs or ultrasound, to check their breasts for problems.

Doctors currently use handheld ultrasound devices to hunt for breast tumors in some patients. But the practice is labor-intensive and depends on ultrasound technicians, who are often few and far between at hospitals around the country.

“One of the major drawbacks of handheld ultrasound is that it takes a lot of time,” said Dr. Nagi Khouri, director of breast imaging at the Johns Hopkins Outpatient Center in Baltimore. “Whole breast ultrasound is highly desirable if it can be done with ease with few if any drawbacks.”

Research has shown more screening does detect more breast cancer. A study published last week in the Journal of the American Medical Association found that annual mammograms combined with ultrasound and MRI significantly increased the detection of breast cancer in more than 2,600 women at higher risk of the disease. Mammograms alone detected cancer in 53 percent of the women, and ultrasound detected 33 additional cases. MRIs found nine cases that were not detected by mammogram or ultrasound.